Call me a geek if you want, but there's something so cool about the these pictures--they may not rival the scenic backgrounds taken here on earth that I download from Webshots (though even among those I have an earlier one taken by one of the rovers), but simply the realization that it was taken on another planet and yet looks so clear--not an artist's rendering but an actual photo taken on Mars. I just find that stunning and exciting at once:

This second one is digitally enhanced, which makes it clearer but a little less like what you'd actually see if you were there: 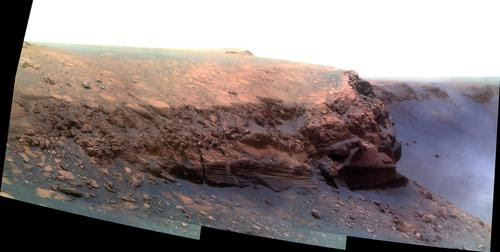 While we were hiking over the weekend, the son of one of our co-hikers asked his dad if they might climb Mt. Everest some day. Who knows, maybe climbing Olympus Mons will be the big adventure in some future generation.
Email Post
Labels: pics

Lauren Michelle said…
Ah, I love the Mars rover pictures. I used to play with them at my student job, making posters and advertisements (and trustee gifts) for the university.

Did you know, the rovers were expected to have pooped out years ago. Even the team that made them is amazed they're still running as well as they are.
6:32 AM

Daniel Ausema said…
Yeah, they've done amazingly well to last this long. It's been a fun story to follow all along.
8:49 AM

John said…
I have a lot of the pictures of Mars saved to my computer, they're all so fascinating.
9:45 AM