So my own ancestry is Dutch (mostly...say, 85% or so), and I grew up in an area with many others of Dutch descent. Even the college I went to (Calvin College) was founded by Dutch immigrants and continues to be probably about 50% Dutch or maybe more. Both of my grandfathers came to the US from the Netherlands, while my grandmothers were born, one in Denver one in New Mexico territory, to recent immigrants. Thing is, my grandparents, like many immigrants even today, were adamant about their kids being American. So I don't know any Dutch. I also feel like I've been discouraged from appreciating my Dutch heritage--not by my parents or anything, but because many places I've been had a Dutch origin but have opened up to many other people. Understandably, those who aren't Dutch feel a bit overwhelmed by that and make a point of their not being Dutch, and suddenly I feel ashamed that I am. I try to downplay that part of me. And then I turn around and see third-generation Hispanic people and think what a shame it is when they don't know their ancestral language. I love Spanish and am much more familiar with the various Spanish and Latin American cultures than I am with actual culture of the Netherlands. All this to give a bit of insight into a paradox within my own identity.

Anyway, I bring this up because I just got from Amazon a fun book that I remember my professor of "History of teh English Language" commenting on: n' Fonnie Bisnis. (Translation: A Funny Business) The subtitle is "The Yankee Dutch world of Loe Verlak, 'peenter, peeperhenger, dikkereeter,' sage." (That would be 'painter, paperhanger, decorator') It's reprint of a humorous 1929 book written in the language of these Dutch immigrants. What Spanglish is to the intersection of Spanish and English, Yankee Dutch is to English and Dutch. Actually, a lot of the words are English...but the author spells them phonetically to mimic the pronounciation of these immigrants. And even when the word is Dutch, well English and Dutch historically are quite similar, so it's possible to work things out. Some of the constructions and a lot of the filler words, though seem to be Dutch. This reprint comes with a CD with a couple of the chapters narrated, which helps a lot. The stories (it's more a collection of stories narrated by one character than a novel) are very funny. And I love hearing them narrated--the little words that are clealy Americanisms are hilarious (joeno = you know; aiteljoe = I tell you). But it's hard. I was thinking it might be like reading Riddley Walker--once you get into it, it all falls in place. But I think my attempts to reconnect with my Dutch past might be a bit more challenging than that.

Ah well, when I get frustrated, I can just close the book and look at the quote on the back, spoken by the character in the book to encourage sales: "Of kos joe'll lijk dis boek!" 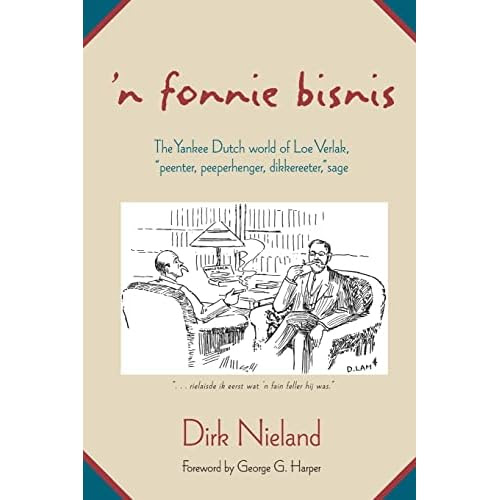 Me said…
I attempted to learn Dutch, being my own ancestry. Both my parents were born here, but my father's parents were immigrants. Learning dutch is so hard, as is learning any other language other than English. Most of the words are very similar, but it's the masculine and feminine and neutral that gets me stuff. And the rolling of the rrrrr's.

Good luck to finding about the dutch, and if you find anything interesting, be sure to let me know. :)
3:48 PM

Daniel Ausema said…
Thanks, I will. I'm sure you know far more Dutch than I do then. But I suppose I'll pick up a bit from the book. I realize that my mom says 'melk' for 'milk' and that's Dutch. Funny.
9:03 PM

Celina Summers said…
as a second-generation French-American myself, I have to admit that I wasn't given an option about being bilingual as a child. Even to this day, when I use french so rarely, if I am immersed in the language for a day or two it comes back to me.
10:02 AM

Daniel Ausema said…
My dad never learned Dutch, despite being 2nd-generation. My mom never learned it formally, but I think that when she gets in a situation where she needs it, she surprises everyone--including herself--by how well she actually remembers it. But her dad was very involved in helping new Dutch immigrants get settled, especially in Canada, so she was much more exposed to it than just the one parent.
7:55 AM