I grew up in a type of area where people from a ways away drive to to see the fall colors. Michigan can get some stunning views of red and yellow and orange mixed with the green of leaves that haven't changed yet and the darker green of pines. But it's hard to claim that as better scenery than what you see in the mountains right now--the splash of a yellow so vibrant it almost hurts against the dark evergreens. Some of the best views are in those places where there's just a few aspens, so that when their leaves were green you'd hardly know they were there among the pines, even though it's such a paler green...but turned yellow, you can't miss them. And then there's views like this, coming down today from Red Feather Lakes to the Poudre Canyon: 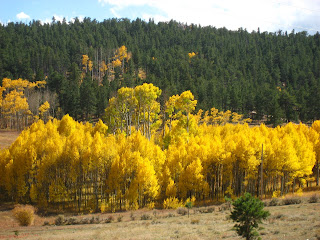 PS Did you know that a stand of aspens is considered a single organism, rather than each tree being a separate organism? This makes it the largest single organism on the planet--for a while a collection of mushrooms in Michigan's Upper Peninsula was considered largest when they first thought to consider that such a thing could be one organism instead of many--I remember that story from back in high school or college--but they must have realized or decided to consider the aspen groves in this way more recently than that.
Email Post
Labels: mountains scenic