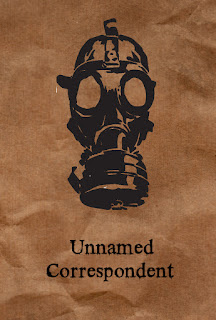 Our second character from Spire City: Occupied has no name. The correspondent is from Spire City, conscripted into the Mernan army, and reveals little else about their history or identity.

What they do make clear is what's really happening in the war effort. The people of Spire City, those the right age to fight and fit enough (and, typically, poor enough that they can't pay their way out of it), are forced to fight for the city's occupiers. The correspondent...does not believe in this war. Scalony army, Mernan army, what does either one mean to these conscripts?

The reports sent back, presumably smuggled back to the city in ways that keep the correspondent's identity unknown, reveal the meaninglessness of the war, the ways that even those who think themselves good end up taking part in its cruelty. And the ways a moment's luck can make more difference than all the strategy or seeming superiority.

Little as we know for sure about this character, they're one of my favorite's--and I think readers will feel the same about these reports from the front lines of a senseless war.