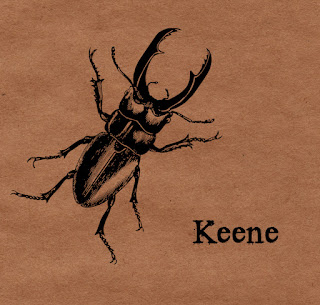 Now back to the characters of Spire City: Occupied.

Keene is...he's fun. A rugged, ragged-around-the-edges hunter who lives in a harsh landscape, the home of the great beetles that are eventually tamed and hitched to the carriages and taxis of the city. He feels very different from most of the other characters I write (here or in other books and stories).

The thing about riding beetles is they may be emblematic of Spire City, but they can't be raised near the city itself. In fact, the original books begin with a scene of Chels and Mikheen watching a train full of young beetles arriving from their distant land.

Well, Keene is on the other end of those trains. In fact he's old enough, has been at this beetle-hunting stuff long enough, that he might have been a young beetle hunter at that very time, capturing the beetles in their pupal stage so they could be trained and transported north to the city. And here he is still, some twenty-five years later.

The land where the beetles hatch is a harsh one. The Beetle Wastes are full of petrified trees, dirt crocodiles, giant dragonflies, carnivorous amphibians, and many stranger creatures that humans rarely see. It is a land of little water and what water there is likely to be deadly.

It is a land that you will get to see, through Keene's eyes, over the course of this novel.