Mad science has always been a key part of the Spire City stories. Whether it's the strange textile techniques among the Neshini people far to the north in The Patterns of Cloth and Dreams or the cruel serum invented by Orgood in the original series, the technological mashups of the airships of Aopthen or the makeshift lab in the Weave where Mendat does his part to combat Orgood's infections--the science of these stories is wild and inventive, for good or evil. 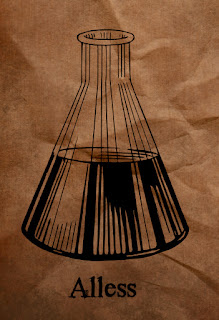 As you know by now, the catalyst of Spire City: Occupied is the death of Mendat, now a couple of decades later. But he was not alone in his hidden laboratory in the Weave at the end. He had two apprentices, Alless and Sami.

Both are young, and both worship their late mentor. Alless is our point of view character for these episodes. She is young and curious and fiercely loyal. She is especially interested in mixing chemicals to create new substances, whether those end up as hair dye for the tips of her long hair or for making some elaborate contraption function. It's almost always both of them in these scenes, working together to honor the memory of Mendat and to use their own inventions to help Spire City become the safe place Mendat would have wanted it to be.

Their dynamic can be seen in this snippet from their first episode, when they manage to get into the hidden inner laboratory that Mendat had hidden even from them:

Weapons? Something to save the city? Alless kept turning in stunned awe.

“Burn it.” Sami was shaking his head as he took two steps toward one of the weapons. “We need to destroy this. Mendat would never want it used for this war.”

Alless grabbed his shoulder, as if it would keep him from doing anything rash. “We can't. I won't. I won't destroy a single thing Mendat created.” She pulled Sami forward until they were both touching the unfinished muzzle of the cannon. Squeezing his shoulder as if doing so could stop the tears from coming to her own eyes, she said, “Not one single thing."