World Book Day doesn't seem to get a lot of attention here in the US, at least not in places where I've lived. It is an internationally recognized day, though, and I remember it being a big event in Spain. I was always told the date was chosen because April 23 is the day both Shakespeare and Cervantes died, not only the same date but the same year as well, 1616. The most celebrated writers from both the English and Spanish canon happened to die on the exact same day. Now that's something worth noting. 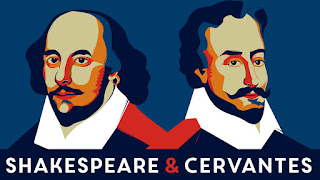 Turns out that's not quite true, if what I'm seeing now is correct--Spain was at the time on the Gregorian calendar, but England was still on the Julian, so while they died on the same date, the days were ten days off.

But regardless, a day to celebrate books is always a day to remember. And not only does it commemorate two great writers, April 23 also marks the death of the writer, Garcilaso de la Vega--however not the poet I first thought of when I saw the name (a poet best known for introducing and developing Renaissance poetic styles in Spain), but rather an Incan-Spaniard writer who chronicled the history of the Inca people and is credited as the first writer born in the Americas to have his works spread widely in Europe.

(Silly fact: a classmate of mine performed a song he wrote about the poet de la Vega when we were in Spain, to the tune of "House of the Rising Sun"; it began "Garcilaso de la Vega es my héroe / escúchame, y tú también tendrás la fé"--"Garcilaso de la Vega is my hero / listen to me and you also will have the faith.") (Silly fact #2: any song that fits the tune of "House of the Rising Sun" can also be sung to "Amazing Grace"; and the theme of Gilligan's Island. The more you know...) 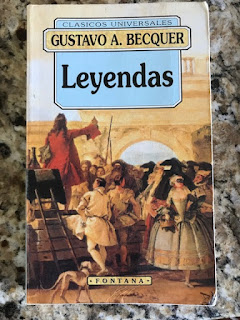 So I had no idea about the bigger history or what was going on with the day when I was in Spain twenty years ago, only the most general part about Shakespeare and Cervantes. But a day to visit a bookstore? Well... I was living pretty stingily plus didn't want to have to overload my suitcase coming home about a month later, so I bought one book. I know exactly which one it was and in fact still have it sitting right here, Gustavo Adolfo Bécquer's Leyendas.


But there's more to World Book Day in Spain than the books. It's also a sort of Valentine's Day, and the tradition is not just to buy a book but exchange books with your lover. So as I bought the book, I was handed the receipt...and a rose. What was I supposed to do with the rose? I was friends with my classmates, but there weren't any of them I could see myself giving the rose to do without it being awkward... So I gave the rose to the mother of my host family.

And kept the book for myself.

Happy World Book Day to all. Now go out and buy a book to give away (and a few more for yourself...).

(I have seen the picture above of Shakespeare and Cervantes on various posts and articles about World Book Day but haven't yet found the artist or whom to credit for it. If it's yours and you want credit--or it taken down--please contact me.)
Email Post
Labels: books holidays Spain Spanish

Hebe Adventures said…
I am thankful to this blog giving unique and helpful knowledge about this topic. Dublin Host Families