Earlier this month I had the honor of visiting Lindsey's blog to talk about the origin of The Silk Betrayal. And now it's her turn to come visit over here. Her SF novel Scylla and Charybdis has just been released. I read the opening chapter(s?) some years ago, when that was all she had written and ready for critiquing, so I'm thrilled to see it published now. Knowing that she is a professional musician, I asked her to write something about how music plays a role in the novel.

Here is her answer: 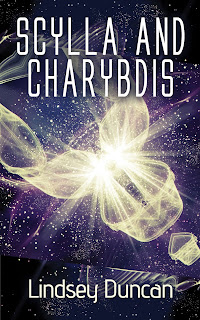 This may sound like an odd declaration from a professional musician, so let me explain.  It’s taken me a long time to get over my self-consciousness about including musicians in my work, and this goes back to my days in science fiction and fantasy fandom, playing in the worlds of other authors.  In fanfiction writing, there is a concept known as the Mary Sue – an “author insert” who is bigger, better and more awesome than the characters of the original work.  They romance the main character (sweep Captain Kirk off his feet, for instance) and generally save the day.  And to me, as a beginning writer, including musicians felt a bit too close to writing a Mary Sue.  I also was afraid that my passion for the topic would get the better of me, and I’d ramble about the technicalities.

Now, even those of you who don't know much about writing can think of the counter-example, that classic piece of writing advice:  write what you know.  Certainly, I've written musician characters since shaking off that first uneasy fear, but more than that, music and musical themes have crept into my fiction, singing out where I least expected it.  And there are, indeed, notes of it in Scylla and Charybdis.

On the space station that Anaea calls home, music appears in a manner both spontaneous and personal.  Rather than formal melodies written by human composers, it is designed to respond to the listener(s) and their mood, sculpted by technology.  I reference the pentatonic mode, a set of five notes (hence the name) that will always harmonize, no matter the combination they are played in.  My harp group plays an improvisation we call "White Strings" because, while in the key of C, playing just the white strings (skipping red Cs and blue Fs), the harps fall into pentatonic sync.

In the wider universe, traces of song appear in the artifact of printed sheet music, in the holographic preservation of orchestral concerts.  Step into a special booth, and one is surrounded by a symphony recorded centuries ago.  I had a lot of fun considering how classical music would have evolved between our now and Anaea’s now, though I must admit that classical music is not my specialty.

Which is not to say that I think music in Anaea’s world is all in the past, either.  In the place she was born, it is continuous, ever-changing … and I’m sure it is in the rest of the universe, too, but with the possibilities of billions more minds.  Musicians are always discovering some part of themselves in old songs.  In our world today, traditional music from centuries ago is alive and evolving, with new compositions written in the style and arrangements sometimes borrowing from jazz and pop, sometimes their own beast.  I have no doubt that this exploration will continue.

That’s a prediction more reliable than flying cars.  Especially ones that look like horse-drawn carriages.

Much thanks, Lindsey. Now everyone go pick up a copy of the novel!
Email Post
Labels: guest blog publication science fiction