I had an Amazon gift certificate, so I just received two books that I'm looking forward to reading: Peter S. Beagle's A Fine and Private Place and Ekaterina Sedia's The Secret History of Moscow. For years I've listed Beagle as a favorite author, based on The Last Unicorn and The Innkeeper's Song primarily, but I hadn't read this, which I know some consider his best. And I've been hearing good things about Sedia's book. I may be saving them until our next book club meeting, because it's my turn to bring a book, and I suspect either would be an acceptable suggestion. 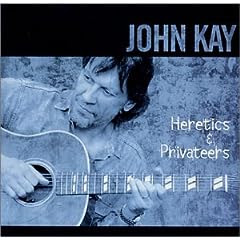 I also got a CD I've been keeping an eye out for years--John Kay's Heretics & Privateers. When I was living in West Michigan, there was an independent, non-commercial radio station that played an incredibly diverse mix of music, but at the time leaning toward folk/singer-songwriter-type music (with a fair amount of jazz and blues as well). John Kay was the singer for Steppenwolf (well before my time...), but solo he sings a sort of folk-blues. The title track begins:

Work and worry's all she's known
Lived golden rule since the day she was born
Through all these troubled years
She raised her family, there was no time for tears
She's done her best, the kids are grown
She prayed each day for a life of her own
Last night she disappeared
She's joined another tribe, the heretics and privateers.

And shortly after that is this cutting line that I love, "God bless the company / for two weeks severance pay."

I've never found another station that plays this music--it's too recent (early aughts) for classic rock-type stations but too much like older music to find a comfortable home on other stations. I imagine it had some airplay on NPR and similar stations at the time, but if so it's not one I've heard since moving away from Grand Rapids. So, thanks WYCE.
Email Post
Labels: books music

Barbara A. Barnett said…
The Secret History of Moscow is sitting on my "to read soon" pile as well.

I actually just got to meet Ekaterina Sedia on Sunday, and she's a really wonderful person. She's a South Jersey-ite like me, so someone from my in-person writing group who knew her from the online world invited her to be a guest author at one of our meetings--we pelted her with questions and she joined in on our crit session. It was quite cool.
7:47 AM

Daniel Ausema said…
Very nice--she has an even newer book as well, Alchemy of Stone, that sounds good too. (Will you be falling into the name-dropping trap often, Bibs? ;) )
8:03 AM

Barbara A. Barnett said…
Will you be falling into the name-dropping trap often, Bibs? ;)

Says the guy who blogged about his book group getting to chat with Connie Willis. :P
11:51 AM

Paul Abbamondi said…
Mmm, I got to read Secret History of Moscow in its baby stages and loved it then! The final book is great, as is Kathy, and I hope you enjoy it! :D
8:39 PM