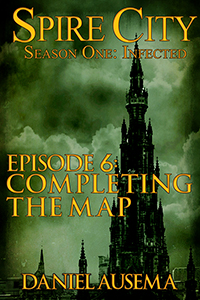 Episode 6, "Completing the Map" will soon be available on Amazon and B&N and sent out to subscribers. As those who've read the earlier episodes may suspect, the word "complete" in the title is a deliberate connection to something more harrowing than the word usually means...

This is the end of what I always saw as a complete arc within the longer arcs of the season and series, partly as a playful nod to the way many TV shows are structured, with the first six episodes being allowed a certain amount of space to see how they perform before the studio commits to the full first season. So, yay!, Spire City will continue for the full season. All execs here at studio Ausema are in full support of the show. Umm, series.

That also means these six episodes originally made up the first bundle, as released by Musa. For a variety of reasons they decided to publish season one as two 35k-40k-word bundles rather than a single, novel-length, complete-season DVD boxed set collection. So Spire City: Contagion comprised these six episodes (yes, I double-checked Strunk & White to make sure I used "comprise" correctly there...).

It also means that there are people who bought the first bundle but didn't get around to the second before Musa shut down. I don't want them to feel like I'm trying to cheat them, so watch later this week for a special offer to them for subscribing to the second half of Season One at a discount. They won't get the full season bundle, so new readers to the series should still subscribe normally, and I'll send out the episodes that have already come out. But they can get the rest of the episodes from here on out. So stay tuned, if that applies to you!
Email Post
Labels: fantasy publication serial fiction Spire City steampunk