I invited one of the other writers from the anthology Steampunk: The Other Worlds to stop by here and tell us some background behind his story in the anthology. Chris Wong Sick Hong is a writer of slipstream, fantasy, and SF, and you can find more of his work at his website. So here is Chris's post

And a Story Begins 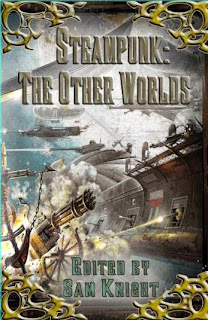 So. A behind the scenes/making of. “Under a Shattered Sky” from Steampunk: The Other Worlds. Let’s begin.

Opening tableau: an image of grey, broken dust-swept plains, lonely under a black sky. Bereft. Barren. When I closed my eyes, that was what I saw. An atmosphere humming with the oboe tones of desolation. Sunsets unwatched, a smaller light fading into oblivion.

Now we need people. Since this is steampunk, that constrains the tech level of any civilizations. It will be steam-based. Possibly British, or at least the American stereotype of British. Tea time marked by the anemic ticking of a dying clock. Cricket in space. Fabulous!

Perhaps nomads wandering the world, eking out survival, but not hope, between sandstorms and sullen oases. One mistake way from desiccation.

Then again, apocalypses are cool. Cool with a Capital Bowtie and Fez. But with a gritty, streetwise, 90s superhero reboot vibe instead. (Anatomy optional.) Sometimes you need to be strong and dress in black pleather just to get up in the morning, because nothing says “survivor” like skin tight.

Cities it is. Or rather, a city.

And the one thing all viable cities need is a water source. So let’s put it on a lake. A deep one, for dramatic effect. Deep, cold, crystalline, pure.

But how did such a city and lake come to be on such an inhospitable planet? Not just how, but why?

Good thing this isn’t geology/meteorology/archeology pr0n. Human nature is strange. People will nitpick the tiniest details to death but leave the big, flying, robot elephants with laser tusks unremarked upon. Anything big enough fades into the background without question. Just make it awesome and move on.

So while we’re at it, let’s blow up the moon—no, two moons!—and crack the sky too. Two moons to make it clear this isn’t Earth. And jagged, purple, ugly scars sectioning off the sky.

Do I need to work out the complex dynamics of the tides that two moons would cause? No, because they’ve been explosively remodeled. Apocalypses are blank checks cashed in Hell by surly tellers in cheap suits. When even the laws of physics can change, everything can be normal.

Back to the city. Industrialization begets standardization. The only way a machine can stamp out millions of knickknacks that other machines combine into more complex thingamajigs is if all the knickknacks and thingamajigs are the same. And machines are notoriously finicky. They need maintenance, especially parts. The more machines that share a standardized part, the more profitable it is for both the machine owners (lower cost of replacement) and part-makers (economies of scale).

The steampunk ethos was born at the beginning of this, in heady times where the Victorian work ethic and fetish for classification were underpinned by copious use of laudanum and cocaine.

Let’s make this—the drive of classification and order, not the drugs—part of the city itself. Like the design of Washington, D.C., USA. All grids and geometric perfection. Then shatter that too. Echoing reminders of a broken world, broken city, broken lives.

Flesh out (or gear out) the steampunk innards and boom: setting.

Now for characters. I like one. One is simple.

Sitting there, waiting to die isn’t very interesting. Simply struggling for survival, not so much either. The daily habits and activities of remote tribes is a National Geographic Special, not a SyFy Original Event! Get with the sharknado, people. This woman has goals.

To find other survivors, whatever it takes.

Pause for a moment. Stories are about people. Ellsbeth, our heroine, needs a dramatic arc. Since this is a short story, it must be compressed. A story centers on significant change or the lack thereof. (I think this is from Flannery O’Connor [http://www.georgiaencyclopedia.org/articles/arts-culture/flannery-oconnor-1925-1964], but I can’t confirm and Google is being singularly unhelpful.)

But the choice needs to be real. What is she doing. Why is she doing it? What adds depth to the choice? What makes Ellsbeth a real person?

A strange figure, stoically wandering a wasteland while refusing to give in. Why does she do it? Because she doesn’t have a choice. Bullshit. That’s not a story. That’s a cliché. Spaghetti western. No name, no horse, but trusty gun at your side (even though if only has three bullets left, they’re the best darn bullets a guy could have.)

People have issues. Living through an apocalypse is traumatic enough. Leaving the safety of a known area to strike out on what must seem like false hope? Even more mind scrambles. She’ll have issues. Serious ones.

Unfortunately, mentally wounded people are not very easy to relate to, or write. If she’s too broken, she won’t be functional. But she also can’t be a font of bubbling optimism. Any good humor would be forced. And if she’s been doing this for years, that’s certain to have been drilled out of her.

So a general plot. What does she have to do to survive? To make progress with her journey? Jot down a general sequence of events, and…then what?

This is not a story yet. Time to add issues. People isolated from society for extended periods of time start to break. Start talking to themselves and inanimate objects. Maybe hear voices back. That’s it! A Voice! Taunting, snide, rude. Trying to talk her into giving up. And possibly real! This is another planet, after all. We have an antagonist.

But what would the Voice taunt her with?

Any perceived weakness? Character flaws? The pointlessness of it all? Feels shallow.

I wrote lots of potential dialogue. It didn’t do much to deepen Ellsbeth’s character. It felt like B-movie boomstick witticisms. But what could do both?

Reminders of what she lost.

After that, more struggle in story present, and then the choice. With her entire world gone, even the ruins falling apart, and a miscalculation threatening to take her life, why continue? Even she doesn’t quite believe in her own hope.

What does she do? And whatever she decides, will she even know why?

To find out, order a copy of the anthology Steampunk: The Other Worlds today.
Email Post
Labels: anthologies guest blog steampunk writing