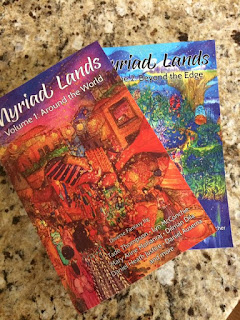 Just got my contributor copies of this 2-volume anthology. Very cool artwork, and looking forward to checking out the many stories in it. All of them are fantasies set in or inspired by non-Western historical locales and cultures.

So what's my story about? A while back I was contemplating tackling a new novel and had some vague ideas about the setting, which was largely inspired by the history and cultures of India. I dug deep into learning all I could, talking to people who knew it from inside, reading many works of fiction and nonfiction. And I also wrote this short story to get my mind into the setting.

The key to this story is that the culture venerates fire, and so when a high-born girl is burned by fire, it's seen as a judgment for her actions rather than an accident. So she must deal with being suddenly an outcast, untouchable. I really liked the character, Jaritta, and she (along with her still high-caste brother) became a central character in the novel as well, a story set some 10-15 years later.

While more a fantasy than a steampunk story, it is worth noting that this was my first big work deliberately set at the cusp of an industrial revolution and shares a lot of the themes that I like to explore in more steampunk-y settings.
Email Post
Labels: anthologies fantasy publication short stories steampunk

truthaboutislam said…
Long-time back mankind was not able to understand certain data present in the holy Qur’an due to insufficient scientific knowledge. But today due to enhancement in proficiency all verses of Holy Quran And Science citings are being drafted in almost any language.Islam is against Terrorism Terrorists are not following Islam. Allah says in Quran whoever kills a soul unless it is as though he has killed all mankind. Muslims Are Not Terrorists and whoever saves one life it is as if he had saved mankind entirely. Islam treats men and Women In Islam as one, yet they are dissimilar.
5:14 AM

al-dirassa said…
This comment has been removed by the author.
7:46 AM

al-dirassa said…
I admire this article for the well-researched content and excellent wording. we provide learn Arabic online at affordable charges. to know more visit our website.
7:47 AM

al-dirassa said…
This comment has been removed by the author.
1:24 PM