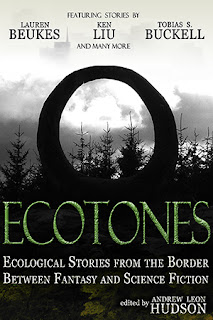 A few days later than I'd intended coming to this, but the Kickstarter for this anthology is now live (and already approaching 50% funded). This is a really exciting project, with lots of great writers, so please check it out and consider reserving your copy (and even get copies of the earlier anthologies as well, if you wish!).

As part of the campaign, there will be a variety of interviews/roundtable discussions of a sort posted at the anthology's page. You can check out the first of those today, "Can you describe an ecotone that has had personal significance for you?" (Ecotone being a literal or metaphorical borderland where two different places come together.) And keep following the blog all month for the rest of the questions.

We're also organizing an ad-hoc blog tour among us. So coming up I'll have a guest here, and at some point I will be a guest elsewhere as well.

All of which means, there's lots of cool stuff coming associated with the anthology. And lots of great rewards available in the Kickstarter!
Email Post
Labels: anthologies interviews short stories