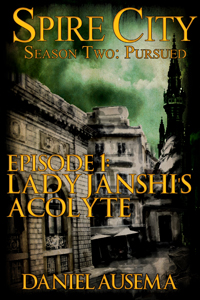 It was almost a year ago when we were at this same point, except with Musa publishing Season Two and with three (long) weeks between every episode. Now...Musa is no more, and I'm the one behind the scenes* getting files ready and all that. By the end of this month, episode 4 will be out, and we'll be ready at last to move on to the episodes that never came out before.

So strap yourself in, subscribe if you haven't yet, and be ready for the higher stakes, deeper tragedy, and even greater resistance against Orgood and his supporters, who hold all the power. The infections continue to spread (some of my favorite characters first make appearances here, though of course Chels remains the central focus) and to claim victims (alas), and Orgood steps up his efforts to eliminate Spire City's downtrodden.

I have decided to keep the early bird special going for one more week, to celebrate the first episode's premiere. So check the Spire City tab for more info on how to subscribe.

*Not that I am the only one, by any means. Many thanks go to my editor Damien Walters Grintalis, who has continued as freelance editor after Musa's shutdown. Also to Kelly Shorten of KMD Web Designs for the excellent cover art. And to Dianna L. Gunn, who is continuing the wonderful work she did for me with Musa to help with promotions.
Email Post
Labels: fantasy serial fiction Spire City steampunk