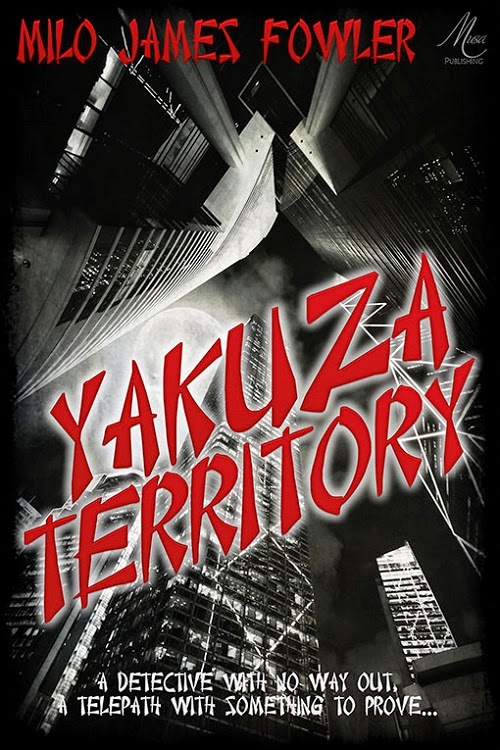 Today I welcome Milo James Fowler to tell us something about his Musa-published novella Yakuza Territory, which comes out tomorrow.

So tell us about Yakuza Territory...and you may be tired of saying (or copy-and-pasting) the exact same answer to that question, so feel free to give the basic blurb, but tell us something different as well. What's unique about this novella that wouldn't be obvious from the blurb?

It's an action-packed story-within-a-story. If you can imagine Die Hard meets Assault on Precinct 13 but with gangsters and a killer robot, you're on the right track. Yakuza Territory delves into detective Charlie Madison's backstory and explains his ties to the Japanese mafia who've shown up in the previous two installments, Girl of Great Price and Immaterial Evidence.

A detective with no way out. A telepath with something to prove...

World-weary detective Charlie Madison has seen more than his share of war. When he stops by the 37th precinct late one night to check on his old friend Sergeant Douglass, the place is as quiet as a morgue. The last thing he expects to find: half a dozen Russian gunmen with a score to settle.

What starts out as a vicious Alamo-style battle soon evolves into something more sinister as Madison's past comes into play. Will his ties to a branch of the Japanese mafia be a help or a hindrance? And who is the strange man in holding? Why are the Russians determined to break him out?

Struggling to survive the night, one private eye must rely on his wits to solve a mystery where he's outnumbered, outgunned, and trapped inside a police station with a soulless killing machine.

Sounds like a lot of fun. Yakuza Territory is the third novella in this future noir setting. Is it important for readers to start with the first one, or do each stand alone as an entry point? And how do you get the balance between welcoming new readers and rewarding those who've already read the others so it doesn't feel like they're just reading the same thing again and again?

It's a balancing act, to be sure. Each story stands on its own. Girl of Great Price was actually published after Immaterial Evidence and worked as a prequel of sorts. Yakuza Territory picks up where Immaterial Evidence left off, but there's enough in Yakuza Territory for new readers to catch up. It's like any detective series that's episodic in nature. Each installment is a single case, but there's also an overarching mystery involving suprahumans with incredible abilities.

Your biography says you're a teacher by day. How does being a teacher affect your approach to writing? Do your students know about your writing, or is it a secret, second life?

My classroom is all about my students' writing. They know I'm a writer, but I don't often share my work with them. Teaching makes me a better writer; writing makes me a better teacher. I can tell my students straight out what editors expect to see, and I can share with them, from experience, the value of the revision process. Many of my former students are writers as well, and it's great to see them pursuing their dreams as I continue to pursue my own--during evenings, weekends, and summers off. Working only 9 months of the year is a great day job for any writer.

In several interviews I've seen you speak of Ray Bradbury as a hero and model for your writing. I can see his touch in the storytelling and prose, but the future noir setting doesn't necessarily call him to mind. Are there other writers or works that helped influence that aspect of the story?

The works of Philip K. Dick, Alastair Reynolds, Franz Kafka, and China Mieville have inspired my future noir stories. So have the old radio dramas Box 13 and Night Beat, not to mention the classic Philip Marlowe tales.

You've also mentioned Write 1 Sub 1 as a big part of your writing life, where you write a new story every week and submit something every week as well. How has that affected your writing approach? What advice do you have for other writers who might want to tackle something like that?

I've learned to write fast and edit slow, to churn words out and clean them up later. I've been on the monthly Write1Sub1 plan for the past three years; but back in 2011 when I wrote the first Charlie Madison novella, Girl of Great Price, I was turning out some of my best work. That year, while I was writing and submitting a new story every week, I penned the short stories that would eventually qualify me for SFWA membership. I think every writer should take a year and try it: 52 stories in 52 weeks. It's definitely doable.

And what's next for you?

I'm currently outlining the follow-up to Yakuza Territory, which will be called The Gifted Ones. It'll delve into the origin of the suprahumans who have appeared in the first three novellas. Judging by my pages of notes so far, it may stretch into novel-length territory, and it will include most of the characters from the first three installments. I can't wait to dive in and start drafting. 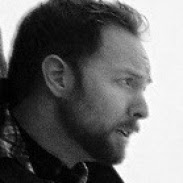 Bio: Milo James Fowler is a teacher by day and a speculative fictioneer by night. When he's not grading papers, he's imagining what the world might be like in a dozen alternate realities. He is an active SFWA member, and his work has appeared in more than 90 publications, including AE SciFi, Cosmos, Daily Science Fiction, Nature, Shimmer, and theWastelands 2 anthology.

Visit www.milojamesfowler.com and join The Crew for updates about new releases as well as exclusive promotions.

Thanks, Milo. You can order Yakuza Territory from Musa and other online stores. Also be sure to visit the novella's Goodreads page.
Email Post
Labels: guest blog interviews science fiction

Anonymous said…
Thanks for having me, Daniel!
6:34 PM