Guest blog giveaway: The Exile of Elindel by Carol Browne

A few weeks ago, Carol Browne was kind enough to host me on her blog, and now I have the chance to welcome her to Twigs & Brambles. Her fantasy novel The Exile of Elindel is published by Musa. You can learn more about it below, and comment to win your own free copy of the book! You have until Monday, November 17 at midnight, MST. 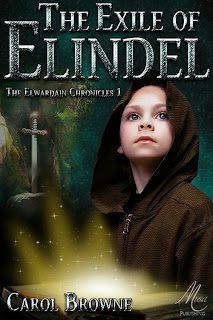 Blurb
Elgiva, a young elf banished from Elvendom, must seek shelter among the Saxons as her only hope of surviving the coming winter.

Godwin, a Briton enslaved by the Saxons, is a man ignorant of his own inheritance and the secret of power he possesses.

A mysterious enemy, who will stop at nothing to wield absolute power over Elvendom, is about to make his move.

When destiny throws Elgiva and Godwin together, they embark upon the quest for the legendary Lorestone, the only thing that can save Elvendom from the evil that threatens to destroy it.

There is help to be found along the way from a petulant pony and a timid elf boy but, as the strength of their adversary grows, can Elgiva’s friends help her to find the Lorestone before it falls into the wrong hands? 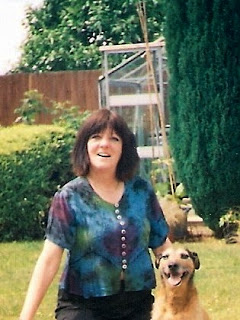 Carol Browne first appeared on the planet in 1954. She regards Crewe, Cheshire, as her home town and graduated from Nottingham University in 1976 with an honours degree in English Language and Literature. Now living in the Cambridgeshire countryside with her dog, Harry, and cockatiel, Sparky, when she’s not writing fiction, Carol spends her time as a housekeeper, proofreader, and ghost writer in order to pay the bills. Pagan and vegan, Carol believes it is time for a paradigm shift in our attitude to Mother Nature and hopes the days of speciesism are numbered.

NobHobbit said…
I read the preview available on B&N and liked it. :)
The Amazon link you have up isn't working, though.
Chelle
8:01 AM

Carol Browne said…
No the link takes you to the tiny URL lol, but if I click on it in my Docs it goes to Amazon. I have no idea why! Here's the full link -
http://www.amazon.com/Exile-Elindel-Elwardain-Chronicles-ebook/dp/B00JRJAY60/ref=sr_1_4?s=digital-text&ie=UTF8&qid=1400179821&sr=1-4&keywords=carol+browne
Thanks for pointing it out, Chelle.
11:53 AM

Anonymous said…
Keep on campaigning, Carol. We're right behind you. I've always liked your book cover, hope it's selling for you.
9:42 AM

Daniel Ausema said…
Finally got a chance to sit down and look at the link. It should work now. (It was the same problem that we had when my post was up at your blog, Carol, where some html spaces were inserted for no logical reason.)
1:22 PM

Carol Browne said…
I've had a week of gremlins, Daniel. You wouldn't believe it!
1:49 PM

Carol Browne said…
I've had a week of gremlins, Daniel. You wouldn't believe it!
1:52 PM

Daniel Ausema said…
Just don't feed them after midnight. And keep them away from water :)
8:26 AM

Carol Browne said…
NobHobbit has won the draw!
5:11 AM

Carol Browne said…
Chelle, can you message me on my author Page and I will send you your prize.
https://www.facebook.com/AuthorCarolBrowne
5:13 AM