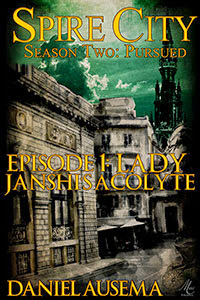 In just two days, we'll be holding a pre-release Facebook event, where people can pre-order episode 1 directly from Musa and can win copies of the first season bundles (as well as gift cards).

I've always been somewhat leery of the blind, unsolicited invitations sent out scatter-shot among Facebook friends, so I'm avoiding that. Instead, I'm casting out the invitation here to everyone who wants it. We'll be chatting there on Facebook from 6pm-8pm EST on Friday, with steampunk and fantasy discussions and pictures and other cool stuff.

Joining me will be several of the other Darkside Codex writers as well as other fans, friends, etc. It should be a good time.

Come on by, anytime in there, and add your comments. And you'll be entered in a chance to win.
Email Post
Labels: fantasy Spire City steampunk