Today I have the chance to welcome Eric Juneau, whose SF novel Merm-8 was released by Musa a couple of weeks ago. To learn more about him, check out his blog (above) and follow him on Twitter: @theWallflower00. 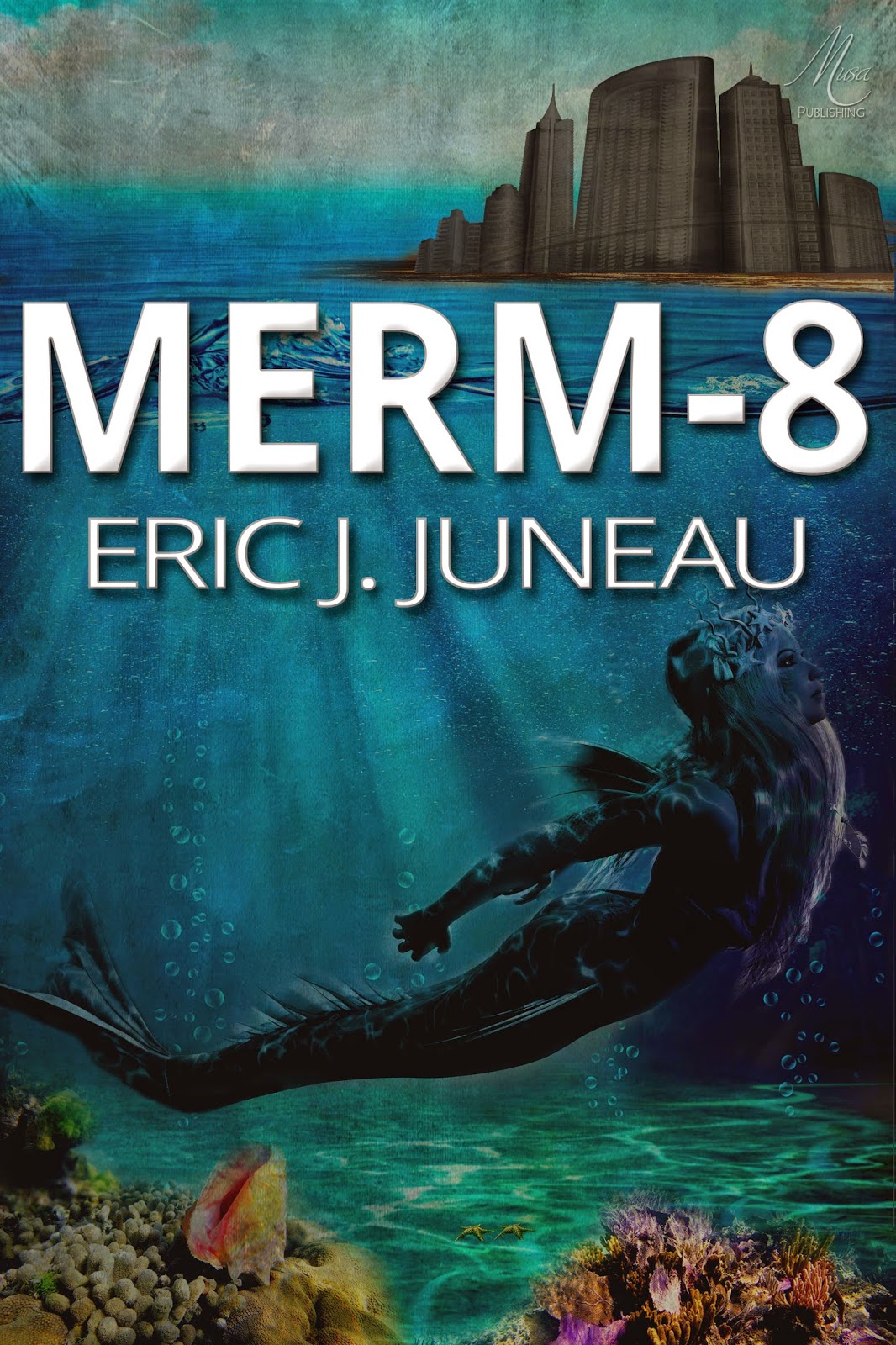 Learning From Your Mistakes


Every time you write something, you get a little better (as long as you're trying hard). Word by word, page by page, until a million bad words get out of your system and you start writing good ones. If you aren't learning from your past works, then you're doing it wrong.

When I started Merm-8, I had finished my first serious novel -- Black Hole Son. And like most serious first novels, it failed to find a publisher or agent after fifty or so queries. And rightly so. It was a novel with a lot of mistakes. It was about two boys who explore a dystopian city of the future. Their journey was the "lens" to see the "wrongs" of our society -- over-medication, corrupt law enforcement, controversy over women's rights, people who cheat their way to success and suffer no punishment. I don't know where the story ended and the preachiness began.

Which was, of course, the problem. If you start with a message, you tailor the story to the message. The characters start violating their common sense to bring the narration to the set piece you want. Coincidences, random scenes, and lots of "reflecting" has to happen in order to bring these points to light. And don't forget the ever-popular "dream sequence". Eughh...

It was also too long. I did my damnedest to cut and cut and cut, and managed to get it to 120,000 words. I still have no idea if it's true, but from what I've read, that is the maximum book length you should query an agent with. The reason being, no one wants to take a chance on a long novel from a first time author. The nature of my problem was that it was really two stories that came together at the end. I was being too ambitious. There's nothing wrong with a "boy meets girl" novel or a hopping, light-hearted adventure. Not everything needs to be an epic.

That's what I resolved for Merm-8. Keep it basic and structured. Have fun with it. Make characters that are funny and clever. Give them outlandish features. Make one a robot, another a mafioso. Give them witty repartee and personal problems. The more charming they are, the worse off they are, the more the audience will want to be with them.

In my notes for Merm-8, I set down some ground rules: "No thinking!" I had just read a lot of J.K. Rowling and Stephen King, two authors known for overwriting -- a lot of ruminating and "feeling" and passages where nothing happens except a character's analysis of the situation or mental state. This is a bad habit I picked up and needed to resolve. All it did was increase word count.

I also made a resolution to make it dialogue-heavy. No one skips dialogue. Readers skip long paragraphs of text. Write fewer descriptions -- give the reader only what he/she needs to know and let imagination fill in the rest. Same for infodumping. The only parts of it that matter are what's relevant to the story. Find an avenue to describe your world-building, like Hermione or Watson or Doc Brown. Mine was an artificial intelligence, which, as I brainstormed, became a major plot point. If you find yourself saying "As you know", that's a red flag. If he already knows it, there's no reason to tell him.

Of course, none of this makes much difference if you can't think of anything. I'm still trying to wrap my head around "write what you know". It's one of the oldest pieces of advice, but it's also somewhat paradoxical. If you only wrote what you know, nothing would be new and exciting. If Stephen King only wrote what he knew, we wouldn't have The Shawshank Redemptionor IT. He told us, in his book On Writing, "write what you want to read" although it's been said by other authors. There has to be a limit though. I'm a midwestern straight white male and right out of the gate, I'm writing about runaway youth, corrupt police, murder, underground drug rings, uber-corporations, and strippers. I've still never been inside a strip club. So make sure you rein it back. "Write what you're comfortable with" might be a good corollary. But it's also important to know if you don't stretch your limits, you won't get better.

One final thing. I picked this up from Jim C. Hines. At the top of my first draft, I wrote, and still do write, in bold letters: "I GIVE YOU PERMISSION TO WRITE BADLY". This is a necessary axiom to keep the words flowing. Too often, you get bogged down in sentences or scenes, thinking "this isn't what I want to say" or "I realize now this negates something I wrote earlier". Just make a note of it (I have a very long list of "things to fix" by the end of my first draft) and keep moving, like a shark. There can't be a novel unless there are words on the page.

And most of all: have fun. There ain't no one making you do this. It is work, but it's supposed to be fun work. If the writing's fun, then you're doing it right.

Eric J. Juneau is one of America's most prominent up-and-coming writers. He lives in Minnesota with his wife, two daughters, and a dog that's either very smart or very dumb. He writes science fiction and fantasy and received an honorable mention in the 2010 "Writers of the Future" contest.

Be sure to check out Merm-8 and his various haunts online. Thanks for the post, Eric!
Email Post
Labels: guest blog science fiction writing

Blogger said…
I have just installed iStripper, so I can watch the sexiest virtual strippers on my taskbar.
2:55 AM