What's in a Genre - The Treason of Memory

Today my friend Nyki Blatchely is guest blogging with us. He's the author of, among many things, the novella "The Treason of Memory," published by Musa. He has a blog where he frequently posts in depth pieces about writing in general and secondary world fantasies in particular.


What's in a Genre? The Treason of Memory
Nyki Blatchley 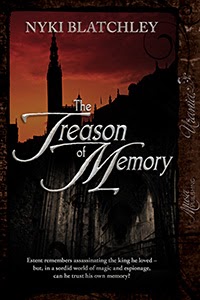 There are certain very predictable questions writers get asked about their stories. The top one has to be "What's it about?" and I sometimes succumb to the temptation to give that one to the traditional answer — "It's about three hundred pages." Another common question, though, especially from fellow-writers, is "What genre is it?"

Genres are both useless and essential. Ideally, every story that makes any attempt to be original (whatever precisely that means) should be its own unique genre, a blend of concepts and techniques that no-one's ever achieved before in the history of fiction. It should climb out of the well-worn rut and strike off down the road less travelled by. It should be the story by which later, lesser stories define themselves.

Even if this is actually possible, though, a story like that could have difficulty getting published. While editors and agents, not to mention readers, don't normally want clichéd fiction, it's better if they can define what a story is. Even if it's not simple, they want to be able to say, "This is a blend of sword & sorcery and urban fantasy, with a touch of steampunk in the middle. Ah, yes, I have just the place for that."

This means that, in practice, an author needs to put thought into what it is they're writing — or, preferably, what it is they've just written. I had this issue with The Treason of Memory, published last December by Musa Publishing. I didn't have any preconception, when I started writing, "what kind of story" it would be. This was partly because it started as a one-hour writing exercise, so I was just writing what came into my head as quickly as I could. In fact, the scene I wrote in that hour ended up "on the cutting-room floor", though it's referenced in conversation, but it set the tone and plot for the whole long piece I eventually wrote.

It wasn't till I'd finished that I started trying to define it. One way of describing a story is to compare it to something else — most fantasy novels used to be "in the tradition of Lord of the Rings", although publishers have found other models to play with now. Consequently, I came up with the description that The Treason of Memory is a cross between Conan, The Three Musketeers and The Bourne Identity.

But what exactly does that mean in terms of genre? It has a hero fighting against ancient evil, as in sword & sorcery. It has intrigue, rapiers and flintlocks, like a historical swashbuckler (though have you noticed how rarely the Musketeers actually fire muskets?). And it has the twists and turns, the paranoia and the low-life of a modern spy thriller whose hero doesn't drink martinis shaken, not stirred.

It's broadly part of a genre usually called flintlock fantasy, but this tends to refer particularly to a more epic style of fantasy, with seventeenth century technology being used for quests and major wars. Not to a more intimate, single-adventure approach, nor to a dark, urban feel. So what would be a more precise genre for this?

My first thought was flintlockpunk. The story certainly has a lot of the "punk" aspects (the paranoia, and the blend of high politics and low-life) but it lacks the retro-futuristic aspect. The pistols are just pistols, not some super-developed form of flintlock weapon, and the society isn't a historical one anyway, but an other-world culture that shares many features with late-seventeenth or early-eighteenth century Europe.

I abandoned that label, although it did more recently inspire me to write a "flintpunk" story, perhaps best described as a dystopian equivalent of the Flintstones. I thought I might actually have invented a genre there, but a bit of research showed that there's a similar, though rare, genre called stonepunk.

What I've settled on for The Treason of Memory is flintlock and sorcery. While this doesn't quite cover the gritty, urban aspect of the story, it does suggest that the story is essentially a traditional piece of adventure fantasy, but in a setting and a stage of civilisation not usually associated with that kind of fiction.

That's an approach I'm increasingly coming to enjoy, by the way, applying traditional fantasy styles to a less explored period of my fantasy world's development, although I still enjoy writing in my "comfort zone" (roughly resembling a cross between Classical Greece and Renaissance Europe). Besides the flintlock period, I've covered a Victorian-style era, an early twentieth century equivalent, and even "contemporary" other-world fantasy, complete with computers and mobile phones. Maybe someday I'll take my fantasy world into space.

So what does this genre-defining actually achieve, besides giving me one difficult question I'm able to answer about The Treason of Memory? Most importantly, I suppose, it helps me to define what I was trying to do with this story, and to measure to what extent I've succeeded.

It could also help me if I try this particular approach again — which I might. Although The Treason of Memory ends conclusively enough, it's set up so that a sequel (or even a series) isn't entirely out of the question. I may not ever write them, but if I do, at least I'll know what I'm supposed to be writing. Flintlock and sorcery.

Nyki Blatchley said…
Many thanks to Dan for letting me play in his sandbox. Please also read his post about Spire City on my blog http://nyki-blatchley.blogspot.co.uk/2013/12/spire-city-guest-post-by-daniel-ausema.html
1:13 PM

E.L. Wagner said…
I think Treason of Memory definitely had room for a sequel. I liked it and found the characters and setting intriguing.

A term I've heard a couple of times is Fantasy Noir. It's not quite dark fantasy, which conjures up images of vampires and demons and post-apocalyptic horrors, but it's not your traditional high fantasy either where no one gets **** all over 'em (sorry, couldn't resist the Python reference). And it seems like it could draw elements from other fantasy "periods."