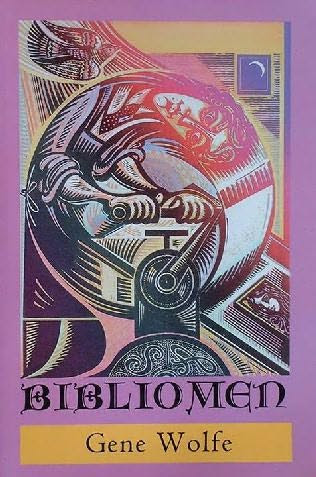 I just received these two books in the mail today from Clarkesworld Books. I'd tried to buy Wolfe's Bibliomen last summer, had it in my shopping cart at Clarkesworld and then was pulled away from the computer. By the time I came back later that same day, Clarkesworld had the announcement that it was no longer selling except in large quantities to other sellers. So as soon as they opened for their brief July-only sale, I checked if it was still available...and quite pleased that it was. In the meantime I'd tried to get my library to buy a copy--no luck--and then to inter-library-loan a copy--no luck either. In fact, they only found one library at all that had a copy, and it was the even rarer, limited edition from the 80s...they weren't about to lend it. Just recently I'd noticed that Small Beer Press is selling this edition of it as well and was about to buy it through them when I learned about Clarkesworld's sale. Amazon lists its lowest price for the 80s edition as $165 and for this edition as $30.

The other is K. J. Bishop's Etched City, which I've already read (from the library), but I really enjoyed it and had been considering rereading it anyway. I chose the Prime edition--I like the cover of the Spectra re-issue quite a bit, actually, but this one is even better. It'll probably be a while before I get around to rereading it, but already I'm looking forward to it.

I'd tried to get Avram Davidson's Adventures in Unhistory as well, but someone beat me to the last copy.
Email Post
Labels: books

Unknown said…
Have you tried looking on Ebay for a copy of Bibliomen? I am an avid book collector and have had great luck picking up books at auction there.

It's so sad that Claresworld is closing down.
4:15 PM

Daniel Ausema said…
I want to say that I checked back a year ago when I was first looking for it and found only a very expensive one (or else nothing and the expensive one was on some other site). Nothing's there now. I haven't been too actively looking between then and now, so I don't know in between there.
9:56 PM

Elliot said…
Cool! Let us know how Bibliomen is. I've never even seen a copy.

Unfortunately, when an author becomes reasonably successful, as Wolfe is, and the publisher does not re-release his early works, it's because they really suck. And yes, while I love Wolfe, he is fallible. So I'm worried that Bibliomen may be a disappointment. Again, let us know!
5:21 PM

Daniel Ausema said…
Hey, Elliot. I don't think that's the reason here. It's more (I'd guess) that it's a type of book that's hard to market. It's not a novel and not a collection of short stories, but a bunch of little vignettes or rather character summaries (its subtitle is "21 characters in search of a book").

So far there's some play between some of these characters where more of a storyline does exist (I could easily be done with it in a night, but I've been reading individual characters between reading other things, so I'm about halfway through.) But mostly it's the fun little Borges-tinted details about these characters, tied together simply by the fact that each of them loves books.

So the market for such a short book is likely small, but I don't think it's lack of quality that leads to it being so hard to get a hold of.
1:43 PM