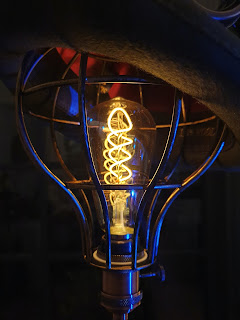 Wow, I didn't know if I'd ever be writing those words. But there it is, at last a chance to revisit Spire City, once again in a serial format.

But this time somewhat differently...

Spire City, the city of beetle-drawn carriages and chained singers, of airships, inventions, and all manner of strange wonder.

You'll have two ways to stay up-to-speed on the story. Sometime later this month (I have not seen an official date yet), Amazon is releasing its Kindle Vella app for serializing stories. And at the same time, I will begin releasing the novel, episode by episode, on my Curious Fictions page.

I'll leave all the nitty-gritty details for later. For now, let me introduce the story to you:

The death of Spire City's greatest inventor couldn't come at a worse time. The fabled city of beetle-drawn carriages is occupied by a foreign power, and that country is at war with another.

Five people find their lives spiraling together in the aftermath of his death:

XXXXX, an unnamed correspondent from the front lines;

Jensha, a singer chained to one of the city's spires;

and Alless, the former apprentice to the late inventor.

I will have so much more to say about each of these characters--and the wonderfully, lyrically weird ways their stories intertwine--in the weeks ahead. The story itself has been dear to me for several years, and the announcement of the Vella app fits perfectly with how I wanted to present the novel. For now I'm just so excited that you'll have the chance to read their stories!

Stay tuned, subscribe to my newsletter, and keep your eyes on social media for any breaking news!