The latest issue of New Myths came out this past weekend, including my flash story "Triptych of the Final String." It's a fable, of sorts--about music and stories and especially learning new stories from each other. Or you could consider it a fairy/folk tale from another world.

As a matter of fact, this one has a connection to the world of The Arcist Chronicles. If you've read The Silk Betrayal, you know that the people of that land refer to their original homeland as The Forgotten South, which is the setting for this flash story. The novel itself never goes there (not book 1, anyway [*whistles*]), but they tell stories of that land and place many of their own fables back there.

This is the third story of mine published in New Myths and the second flash fiction story--but the last was nearly a full decade ago! It's also the second story I've had published with the word "triptych" in its title, after "Peace, a Triptych." I have another story--composed of three drabbles smashed together, all connected with my Spire City setting--with that word in its title that I've never submitted anywhere. Clearly I should...

What's with all the triptychs? Mostly I just love the Garden of Earthly Delights painting by Bosch. And as there's never a bad time to share that image, here it is: 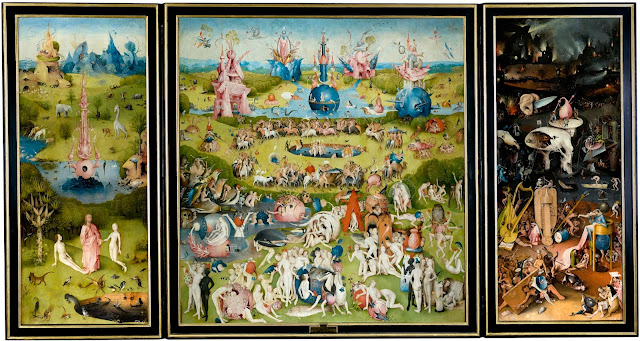