More about "The Spire Singers" 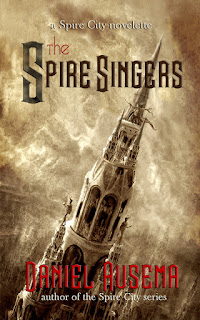 As promised, here's a bit more about that novelette I'm giving away to subscribers who sign up this month:

Cartesz is a man of routine and propriety. The most important routine is the song of the singers, chained to the roofs of the city's spires, whose voices give him the pattern of how to conduct his life. When one of those singers is knocked to the cobbled street, it falls to Cartesz to help her. As his carefully counted life becomes an uncertain mess of bureaucracy and mystery, he realizes that he's never given thought to what it means that the city so callously chains the singers to its roofs. Trapped by the Kafkaesque bureaucracy that stifles so much of the city, what can he do to help the singer? Especially when his own grip on life seems to loosen...


This is not merely another story set in the same location as the Spire City series, but takes that city and gives a very different twist to how we see it. As a story should when it centers on a very different kind of person than Chels and the rest. Cartesz is not wealthy by any means, but neither is he destitute like those characters, and the city he experiences has its differences from what they see. Not that it contradicts anything from the main series, but it has its own, separate feel and mood. There is also one deeply-buried easter egg sort of detail for readers of the main series.

So subscribe today to get all of Season Two as it comes out as well as this bonus story!
Email Post
Labels: novelette publication Spire City steampunk