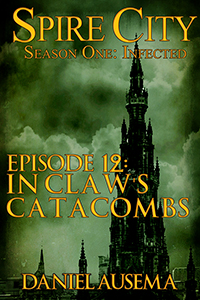 Episode 12 went out to subscribers and live on Amazon, etc. yesterday. That leaves only a single episode left, "Mint's Arrival." There is still time to subscribe, though. Sign up between now and next Monday, and I'll send you all thirteen episodes at once.

This is the perfect chance for those of you who prefer to read an entire season at once, instead of episode by episode. Get the entire season at one time and read through it at your own pace. But this is your last chance to be a subscriber. After next week, the only way to get the season will be to buy them individually from Amazon or B&N or wait for the full season bundle.

Now I'm planning on pricing the season bundle at $4.99 US, so you'll spend the same thing as if you subscribe, but you'll miss out on subscriber perks, including an exclusive Spire City poem and a special deal on a season two subscription. So subscribe today!
Email Post
Labels: fantasy publication serial fiction Spire City steampunk