A half a year ago, I wrote an extensive post about my experience learning Portuguese with the Duolingo app. At the time I was just beginning to try to learn Dutch. As of this past weekend, I've completed all the lessons, so I thought I'd share a bit how that has gone. 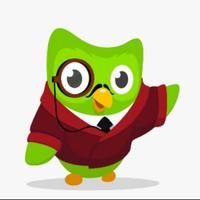 First, the most obvious thing is that this took me only half the time it took me to get through Portuguese. Is there a learning curve to the app itself, and going through again with a new language is that much faster? I don't think so. Changes in the app itself? They made a few changes to how the app works--instead of running out of hearts and having to completely start a lesson over if you get more than three things wrong, it has a meter, which moves toward your goal with each correct answer and a step backward with each wrong answer. It's a good change, at least for how I learn, cutting back on the frustration of having to do an entire lesson over but forcing you to answer more questions when you do mess up.

So is it just that Dutch is so much easier than Portuguese? Actually the opposite. Portuguese was so similar to Spanish that it was easy for me to slack off, take my time. If I missed a day, no big deal. I could remember the vocabulary and grammar without much effort. I knew Dutch wouldn't be so easy to be casual about. So there was one weekend early on when I missed two days, but otherwise I've done at least one new lesson every day, usually two. I prefer not to do more than two new lessons each day. So if I had any extra time to do more (and more often than not, I made the time), I'd go through one or two review rounds ("Practice Weak Skills") as well.

That's still pretty casual, 10-15 minutes per day. If I were cramming to travel somewhere and wanted to have a good base before I arrived, the app would work for that. You'd just have to do a lot of lessons and have a good balance between reviewing weak skills and learning new.

(Worth mentioning that I think the total number of lessons for Dutch was fewer as well. Not way lower, but enough that it surely affects how fast I went through them.)

So how is my Dutch now? Well, there are really four ways to judge someone's ability in a language: speaking, writing, reading, listening. The app doesn't demand speaking. I do my best to say everything out loud that I can, so I think I could be understood, but it wouldn't be fluent, I'm sure. Of the rest, the lessons are split probably 50%-60% on reading, 30% on listening, and 10% on writing. Then with some basic vocabulary focus that could apply to any of those and bleeds into those categories here and there as well.

So that's probably reflected in how I'm doing on those skills--a pretty solid base for reading, some experience with listening (although it's always only one person doing the spoken parts, so it's specifically her accent and voice I'm used to--same thing with Portuguese when I did that), and a rudimentary base for writing. Probably not too far off how I was with French after a year of college classes or Portuguese after a year of Duolingo... Both of those being Romance languages, I could draw on Spanish to fill in many gaps. Dutch being Germanic, could I do the same with English? For some of it, but not as much.

Favorite sentences: "Vijfentwentig schildpadden zwemmen in het water." That sentence practically sings. And "De vriendschap dat ik had met de kooien koeien was heel special." I'm not sure I want to know the backstory of how that second sentence ended up in the app...

Of course, where am I going to use this? The vast majority of people in the Netherlands speak English anyway (not that I have any real potential to travel there any time soon, either...). It's really just a thing to learn, to connect with my ancestry. I'm hoping to dig around YouTube for videos just to broaden my familiarity with hearing it, and I may try to track down some written works to practice reading. In fact, I have a relative, Egbertus Ausema, who wrote some thrillers in Dutch. I discovered him a while back in Amazon and assumed he was some distant fifth cousin or something...and only just discovered the other day that he was actually my dad's first cousin. Huh. I may have to try to get a copy of one of those books...

And what's next? Not a new language at this point. I've been offered a job teaching Spanish this school year, so I'm going to be immersing myself in Spanish for a while at least. Hopefully still maintaining (and improving!) my Dutch and Portuguese, but not something new. I'd love someday to learn ASL or some non-European language (or both!). Re-try to learn Arabic? Learn Standard Chinese or Hindi or some other Asian language? Learn Quechua? Hmm, just typing it out makes me want to learn them all... But none are available in Duolingo at the moment, and it would be best not to tackle a new language for the time being. Much as I might like to...
Email Post
Labels: Dutch language Portuguese

E.L. Wagner said…
Dutch is one of those languages where I feel like I can almost understand it when I read it, though I don't know a lot of the words.

The friendship I had with the cages was very special (I had to look up "heel" and "kooien.

Is that it? If so, I agree. There's got to be a story there. Sounds like that sentence could be a good writing prompt.
9:33 PM

Daniel Ausema said…
Ah, I spelled that wrong: "koeien": cows. The friendship I had with the cows... :)

Dutch definitely has an interesting mix of words obviously related to English words--it's historically closer to Old English than either is to German--and then things that catch me by surprise, both words and structure. I'm sure learning a new language that's neither Romance nor Germanic would be an order of magnitude more challenging for me.
10:23 PM

Engvarta said…
This information might be beneficial for many of the English learners and I am certain that many seekers might gain a lot reading this article here. Thank you for the post. Keep blogging. One can learn and speak English in an effective way, just by downloading English Learning App on your own smartphone, which you can use whenever and wherever you want to practice your communication skills with experts.
English Practice App Android | English Speaking App

Danny James said…
If you want to teach your kids with apps and online activities you have to check out this. The Learning Apps

al-dirassa said…
I read your blog in which you shared your best knowledge and great tips about Learn Quranic Arabic Online. I really need this information. thank you so much for this knowledge. Keep sharing.
4:04 AM