Release day for episode 2, plus a fun guest appearance 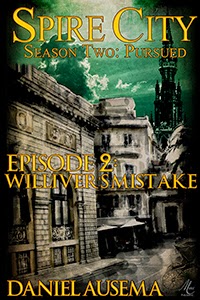 Today is the release day for episode 2, "Williver's Mistake." In this episode, a childhood book inspires Williver to lead a prank against the wealthy neighborhood where he grew up. Little goes according to plan...

I'm also happy to be featured on the blog of Devorah Fox today, with a fun interview. This time it's not me being interviewed (nor doing the interview) but two of the characters from Spire City: Chels and the journalist Kyner Bantosh. I haven't done these kind of character interviews before, though I know some writers really like doing them. Often it's the author interviewing the character, but I decided to keep it in-world. Those who've read Season One will recognize that this interview actually happens in the series (in episode 9), though this isn't a word-for-word copy of how it's written in the episode.
Email Post
Labels: fantasy guest blog interviews serial fiction Spire City steampunk