Episode 11 "The Stranger" plus two interviews 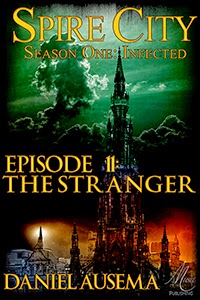 I just got back from a good vacation in the mountains. While we were traveling, episode 11, "The Stranger," was released. I've talked before about status quo episodes and change episodes. This is definitely a change episode, as are the rest of the remaining episodes for season 1. In the middle of a snowstorm, a stranger sits outside the Weave, raving. Is he merely drunk? Feverish with the plague? Mad? regardless, his presence brings them the one thing they want to avoid, notice.

Also while we were traveling, I had two interviews I'd done earlier posted. The first interview was with Lydia Kurnia, who coordinated the artwork for the anthology Unburied Treasures. Always a pleasure to work with Lydia. The interview covers not just the story in the anthology, but Spire City, CLASH! Dawn of Steam, short fiction in general...and drugged out jellyfish. Of course.

The second interview appeared on the Musa blog. These were three questions I'd answered a while back to be filler for whenever Sloane Taylor needed a last-minute post. It gives a good feel for how I came up with the setting for the Spire City stories and how the characters developed as I wrote them. As one commenter responded there, it can be hard to kill off characters...and yet sometimes a writer must be ruthless...
Email Post
Labels: anthologies CLASH Dawn of Steam interviews serial fiction Spire City steampunk