Episode 9, Calling in the Press 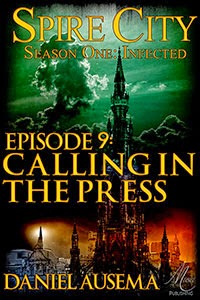 Episode 9 is live today! In this one, Chels decides on a bold move to make the people of Spire City realize what Orgood's infection is doing and where it comes from. Will her plan make things better for those who are infected, or will it backfire?

I've been thinking again recently about how I structured these episodes when I wrote them. There's a balance between moving the season-long and series-long arcs forward and a sort of return-to-status-quo, in the style of many sitcoms and other TV shows. Firefly was definitely forefront in my mind as I worked through this part of the series, so even if no one else sees the influence, I can see how certain aspects of the stories drew from that show.

Some episodes fall quite cleanly within one of those camps, and especially at this point of the first season, more of them are return-to-status-quo stories. Think of them as those fun episodes like "Jaynestown," full of adventure and conflict, but not adding much toward the big arc of the show, especially the mystery of River and the agents who are pursuing them.

Other episodes have a much more obvious connection to the series arc. We're working on the final tweaks of the last few episodes of season 1, and there's a definite ramping up of the confrontation with Orgood coming. My recollection is that season 2 has much more of a long-arc focus (though I haven't looked too closely at those stories in a while). And season 3 has its own twists on that balance.

I won't say here whether "Calling in the Press" is more status-quo or arc-focused. But I will say that this one has some major consequences for events in season 2 and beyond.

Briane said…
Just read your story on Every Day Fiction and came over here. I'm not much into steampunk but I'll try to check this out.

You should, though, consider throwing a story into the mix on the anthology I and my cohorts at Indie Writers Monthly are putting together. It's a time-travel anthology, and there are some prizes. Details here:

I know it's not much time, but you've got a lot of talent, and I like talented writers.
6:10 PM

Daniel Ausema said…
Thanks for stopping by! Glad you enjoyed the EDF story. And thanks for the info on the anthology. I'll definitely give it a look and see if I come up with anything in time.
8:30 PM