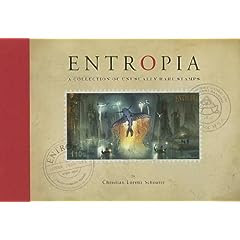 This is a follow-up on the last post about images and text, but first the premier issue of All Possible Worlds is now available to be purchased. I'll have a blog entry about it sometime soon--my contributor copy should arrive any time, so once I've read some of the other stories as well, I'll put my thoughts about it up here.

Also, I still can't get Blogger to upload pictures--anyone else having this problem, or is it just some quirk of my archaic computer? I may try through the dreaded Internet Explorer and see if a change of browser makes it work. Edit: It worked in IE. I'm happy to get images on my blog...but not exactly happy to use IE.

Oh, and one last thing before the real entry--unless html leaves you clueless, do not switch your template to the new version. I tried last night and fortunately was able to switch back. You do gain a much easier way of adding links...but at the expense of most of your control about how the sidebar looks or where things go. I was thinking that maybe there were additional cool formatting things I was missing out on with the old template, but no. The switch doesn't add any new options, just a different way of doing what you can already do.

OK...Entropia by Christian Lorenz Scheurer. It's a collection artwork that pretends to be the stamps of an invented country, Entropia. The artwork overall is good--cartoony, probably influenced by anime (though I'm not familiar enough with that to state it definitively). Much of it is of the people and other creatures of the society, especially of Queen Pingo whose story the text tells, with a few that would be better described as landscapes or cityscapes. Opposite each stamp is the text, telling about the history that gave rise to the step--it's not pushing any boundaries for integrating image and text here, but ultimately I liked this. It's a fun way to explore an imaginary land. The story itself is whimsical. The underlying story is of Queen Pingo and her attempts to restore the country after a coup by an army of robots and then moving on toward a democracy. But the stamps take the opportunity to introduce many other aspects of the world--cow-faced animal herders, swimming rabbits, monks who send flower deliveries by spider... I like whimsy, but I think part of my disappointment with the books lies in this whimsy...I'm trying to put in words what it is, and I think the best I can come up with now is that it's a little overly cute. And now I put that, I think some of the artwork veers that way as well. Cute. And it doesn't really seem to be exploring the intersection of images and words so much as using them without a lot of thought.

This makes it sound like I really disliked it, but that's not true. I enjoyed it. There's a lot to appreciate, despite my nagging feeling that it doesn't live up to its promise. Maybe it should have been classified as a YA book--I think if I'd gone into it that way I would have enjoyed it more. I'd still have liked a bit more depth, but the cuteness wouldn't have seemed quite as...precious. So it is a good and worthwhile book. I just wish it could have been a bit more.
Email Post
Labels: art writing