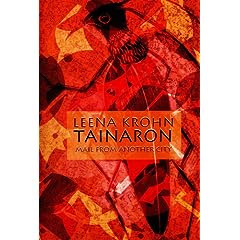 Back in November I mentioned a special deal Jeff VanderMeer was having for a couple of books, including Tainaron by Leena Krohn (translated from Finnish). Well, I received the books just after Christmas--it would have been sooner except the first blizzard (this weekend is looking to make it 4 for 4 weeks with a significant snow system moving through Colorado--very atypical, from what we're told and certainly compared with last winter) completely shut down our postal service for a while.

Anyway, I've just finished Tainaron, and I can definitely recommend it. (If you're wondering how it could have taken me this long to finish such a short book, well, I've been reading a bunch of other things as well--the nature of the book is such that you can easily read one of the letters and then put it aside while you try to get caught up on other reading...until it draws you right back in.) It's a strange and fascinating fantasy told in 30 letters from a woman across the sea in a city of insects to her lover back home. It's not about an overarching plot, not about explaining why she's there (she seems to have forgotten) or why the beetle Longhorn has become her de facto guide. It's about being a stranger, about a bizarre society and the changes that take place there. And the changes that take place for each person even here. Or at least that's what I think it's about after one read. I'm pretty sure that the offer for Tainaron still stands, though I think the special deal on a signed copy of Secret Life has expired. So if you're looking for something different, it's certainly worth checking out.
Email Post
Labels: books recommendation

Celina Summers said…
interesting. I might have to check that out.
7:06 PM

Daniel Ausema said…
You should. And the typical human could easily read it in a day, which means it'll take you, what, 5 minutes? =)
2:40 PM