Goal setting—a fiction writer's how to

I didn't used to like creating specific goals. It always felt artificial and a recipe for disappointment. Because, sure, I could set a goal to write XYZ, but when I fell short I thought the fact of falling short would overwhelm any sense of accomplishment for the goals I did meet or other things I accomplished.

It was reading Jeff VanderMeer's Booklife ten years ago that convinced me to give goal-setting a try and gave a framework for how to categorize my goals. I've adapted that framework, so here's how I've been creating my goals for the past ten years.

One of the struggles I came against was that certain goals are...to some extent out of my control. Early on, one goal I had every year, even before formalizing the process, was to get a short story accepted by a SFWA-qualifying market. And after I'd sold my first, to sell more so that I qualified to join. More recently, it's been to have a work short-listed for an award, for example. Well, I can control some of that--by reading the stories those markets publish, by improving my own craft, by continuing to submit even in the face of rejections. But some of it is outside my control, and I didn't want to judge whether I'd met a goal or not by things I couldn't control.

So I created a category that I called "Uncontrollable" and put those goals in there, knowing that they were more aspirations than actual goals. Then the rest of my goals I split between "Private": what creative things I would accomplish; and "Public": what things I would do on social media, etc. to interact with other writers and readers and help people be aware of my writing.

Those were (and still are) the columns of my table of goals. Then the rows are broken down into a 5-year goal and a 1-year goal and then below that the monthly and weekly tasks that could help me achieve those goals. In recent years I've filled the space below that with a month-by-month breakdown of the year, which was especially important, for example, when I was serializing the Spire City seasons.

It all sounds incredibly...anal. Which is not my personality at all, so it's always been a stretch to get myself to categorize things this way. But I think it's largely because it forces me to do something less familiar and natural that I've gotten so much benefit from setting goals this way.

So, for example, this is what my 2010 goal sheet—the first year I did this—looked like (this was before Musa had accepted the Spire City serial, and at the time I was contemplating releasing recordings of the episodes on Podiobooks): 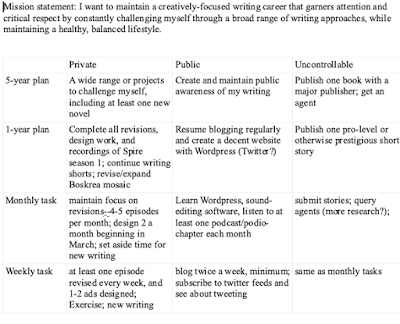 And at the end of that year, I wrote down some notes of how the goal setting had gone:

As for the 5-year goals, the private ones I more than exceeded (I think I wrote at least three more novels in those five years, not including a MG novel draft). The public goals, well that's so general it's hard to quantify. I've ping-ponged between high and low engagement in a variety of online places. And the uncontrollable ones—I met and far exceeded the 1-year goal within a couple of years, but even now haven't met the specific goals I put down as the 5-year plan...

That process has been largely the same ever since. It isn't exactly the framework in Booklife, but it's one that worked well for me. I keep a second document that's a task list. In that I jot down at the beginning of the month what I hope to accomplish that month. Then each week I add what I should aim for that week so that I can meet those monthly goals.

I've never made it through an entire year of using that task list fully--there's usually at least a month here or there where I neglect the document because I'm caught up in other things or don't bother to update it there. It would probably help to put the document on Google docs--it's always been on my desktop, which is where I go to do a lot of my organizational type work, and submitting, etc. but a lot of my writing for the past decade has been done on tablets or a Chromebook while watching kids (or now the puppy) in another room. But even so, it's definitely been a part of my most successful times of the year.

What about you? What have you done to help you meet your writing goals?
Email Post
Labels: goals writing