“The Game” in the Lyrical Worlds newsletter I mentioned in my November Lyrical Worlds newsletter that I would share pictures of the original publication of the reprinted story in it, "The Game."

Fictitious Force had a unique shape. I suppose it was simply folded the other direction (hotdog bun style instead of hamburger bun style, as I used to explain to kids), but it definitely makes it stand out in my box of contributor copies. The cover for this issue was even inspired by my story, so that's a cool thing.

The story itself is a rather jaded take on the political process...sort of. Or else it's a cynical take on office culture and the things people engage in outside of work to keep life meaningful. But really it's a fantasy story of a fantastical city where everything is decided by a game of numbers, skill, intrigue, and subterfuge.

Or as a friend used to say about all his stories when forced to explain them: you know, a love story. 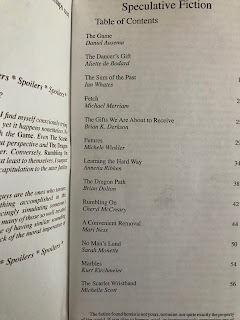 This issue had quite the table of contents. Some of these are writers I haven't heard from since then, but many have established themselves as prolific and award winning writers. Contributors, in addition to myself were Aliette de Bodard, Ian Whates, Michael Merriam, Brian K. Derkson, Michele Winkler, Anetta Ribken, Brian Dotlon, Cheryl McCreary, Mari Ness, Sarah Monette, Kurt Kirchmeier, and Michelle Scott.

So if you've signed up for the Lyrical Worlds newsletter, be sure to open that email and give the story a read. If you haven't signed up yet, sign up now and then send me a quick email saying you'd like to have the November issue as well as future ones. 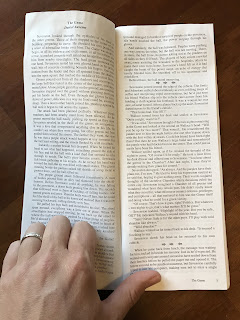