Return of the Spire City ads

Lots of talk about ads today... Here are some very different kinds of advertising.

It was roughly 11 years ago when I began the pre-writing for the Spire City episodes, dreaming up the characters, the effects of their terrible infections, and details of the city itself. Early on I had the idea to have an in-world explanation that these episodes were appearing, serialized, in some pulp newspaper within the same setting. I even created letterhead for the newspaper:

That was fun to create. I started playing around with other grunge and distressed fonts. Of course, the official claim is that these infections are something natural, that the warnings of those who are infected arise from delusions caused by the same infection. So I created this warning to appear within the pages of the newspaper as well. It likely appeared on lamp-posts throughout the city as well.

For those who've read the stories, you know how cruelly false "easily treatable" is...

Anyway, I kept playing around with free images and various fonts and came up with dozens of in-world ads to appear alongside the episodes. They're meant to look...like they'd appear in a cheap newspaper, nothing fancy. I've always loved when writers create in-world...things, realia to go along with the story. It gives the story world an extra dimension, extra weight as it were.

I've shared some of the single-column ads on my blog before, though I had to go back quite a few years to find the latest. I'm planning to continue sharing more of them in the weeks ahead. But first, here are all the ads that I've already shared. You can follow this link to see the original posts for each one as well as new ads in the series. I hope you enjoy it! 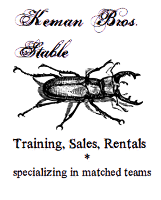 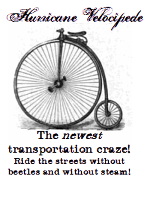 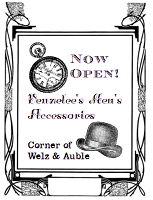 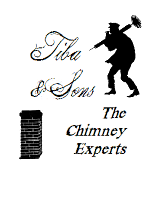 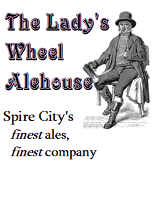