This has been sneaking along beneath the surface for awhile now, but at last I can make it official.

This collection/chapbook of flash stories and poems is now available! 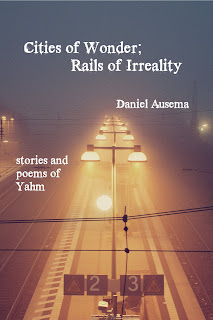 Going back over ten years, I began playing around with the idea of a narrative approach that combines Italo Calvino's arch fabulist descriptions of imaginary cities (and other places/ideas) with Lord Dunsany's languid and dreamy fantasy stories, such as "Idle Days on the Yann." Toss in a railroad and some metaphysical playfulness, and the first story of the series, "City of Games," was published. Others followed, expanding on the original but each its own story, playing with the ideas of meaning and language through the cities that line the fabled rails of Yahm. Some were longer, pushing into the short story range, and some were poems, but most fall right around 1,000 words. Perfect for a quick dip of a read between other time commitments.

For a long time I thought it'd be fun to have a chapbook collection of all those stories. So after weighing various options, I decided to release them now, in print form only. (I'll likely eventually re-format it for kindle and/or other e-versions.)

I'll put up a tab soon with the full table of contents. The collection is roughly half previously published and half completely new. The previous publications include flash fiction that appeared in Raven Electrick Ink's Sporty Spec and Cinema Spec as well as Kaleidotrope and the INDIEpendence anthology plus a poem that appeared in Strange Horizons.

So whether you're an Italo Calvino fan, a Lord Dunsany fan, or simply want to try out some of my writing in a short format (or maybe all three), order your copy of Cities of Wonder, Rails of Irreality today!