"All Things Must Complete" 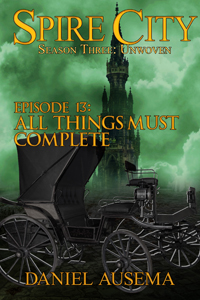 Roughly eight years ago I decided I would try writing something different, a serialization—not just a novel with the chapters tossed out as individual episodes, but something meant to be serialized from the start.

About three years ago, I'd had a novella accepted by Musa Publishing and pitched the idea of releasing the serial as well.

Two and a half years ago, the first episode, "A New Infection," was released by Musa, followed over the next nine months by the rest of Season One, and then the start of Season Two shortly after.

Sixteen months ago, Musa suddenly closed shop, throwing a wrench into my plans for the series.

Thirteen months ago I re-released "A New Infection," this time with a schedule of a new episode every week, with Season One: Infected running through the end of July. Season Two: Pursued followed last fall, and Season Three: Unwoven this spring.

As of this week, the last episode is now out. The season finale. The series finale.

Within the series, when an infected person finally becomes an animal, they are not said to die but to complete. As all things must. The story of Chels and Orgood, Mint and Marrel and the rest is now complete. I hope that it's infected a few of you on its way... So thanks for reading the series. Whether you've read each episode as its come out or have waited for the full season bundles. Or maybe you're still waiting for this last episode to be released. In which case, have at it, and enjoy the series however you choose to read it.
Email Post
Labels: publication serial fiction Spire City steampunk