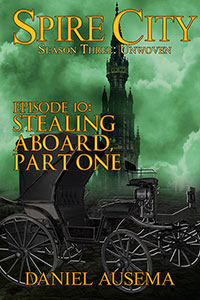 One of my favorite things to see at the end of a TV episode when I was growing up were the three words "To Be Continued." Some people, I realize, hated that, but it always got me even more excited to find out what would happen next.

Sure, you had a moment of feeling cheated of an ending—what would MacGyver invent next? would Scrooge McDuck ever get his lucky dime back? could Magnum get out of the predicament he was in?—and a lingering worry that you'd miss the following week (sometimes difficult to remember how chancy that was in those days). But I always knew that I'd liked those multi-part episodes the best in the past, so the anticipation would build up as I waited for part two.

So this week's episode honors those memories, a part 1 that will be continued next week—same time, same channel...or anytime. I hope the anticipation builds and makes the pay-off even better!
Email Post
Labels: publication serial fiction Spire City steampunk