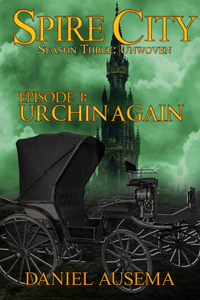 After the dramatic finale to Season Two, what will happen to the people who lived in the Weave? And what will the cruel Mint do to continue his hunt against the city's powerless? Each of them reacts in different ways, which opens up many new parts of the city and new ways of seeing their infections. So sign up now to receive all the Season Three: Unwoven episodes as they are released.

This is the final season, bringing a close to the stories of Chels and Orgood and the rest, starting with episode 1, "Urchin Again," which will come out on March 7, and ending with episode 13, "All Things Must Complete," which will be released on May 30. Thirteen weeks, thirteen episodes, and one dramatic finale.

All the details on subscribing are on the Spire City tab. There is a special deal going on right now, through the end of the month. If you've read the other seasons, then subscribe for the low price of $5 US. Or if you're new, subscribe for $12 US, and I'll send you seasons 1 & 2 immediately, as well as signing you up for season 3. This is a limited time, so take advantage now! You might even have time to read through seasons 1 & 2 before season 3 starts...if you hurry.
Email Post
Labels: fantasy serial fiction Spire City steampunk