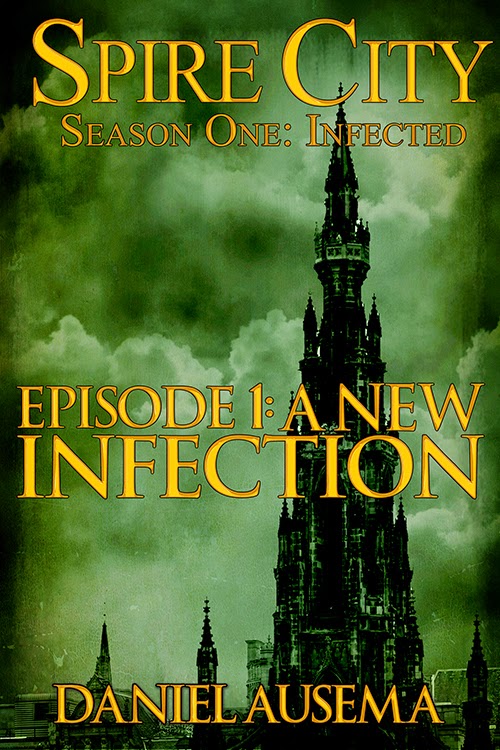 Well, ever since Musa's sudden closure, I've taken my time weighing options and planning what best to do about the Spire City series. More than half of season two and all of season three were still unpublished, but rather than plowing on ahead with those, I've decided to start over from the beginning. Starting on May 4, Season One: Infected returns!

This time around, though, I'm fixing the two things that seemed most frustrating for readers: first, no more waiting three weeks between episodes. This time through, a new episode will come out every single Monday, until the end of July. Thirteen weeks, thirteen short-story-length episodes.

Second, I'm offering a subscription option, something that logistically never panned out with Musa. I've got everything set up now to take a simple Paypal payment (to danielausema [at] gmail.com). Then every Monday I'll send you the latest episode, in whichever file format you prefer.

And because this has already been released, I'm offering this season to new readers at a very low price of $5.00 US. For that you get thirteen episodes plus the single-file, book-length bundle at the end of season one's run (and possibly other deals along the way).

You can still, if you choose, buy the episodes directly from Amazon or B&N. In fact, on Amazon, the pre-order page is already live, and I'm hoping to have pre-order pages for at least the first handful of episodes within the next week. Whichever works better for you is fine with me.

So check out the Spire City tab above for more information about the series and to answer any questions you have. And get ready for a New Weird-influenced, steampunk fantasy about outcasts fighting the powers that be.
Email Post
Labels: fantasy publication serial fiction Spire City steampunk