A Dream of the City's Future published

The August issue of Penumbra is out now, and look at that cover: 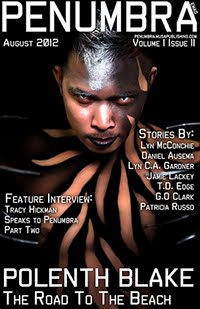 My story is one of a handful of stories I've written that take place in the city called Boskrea. I haven't said a lot about that setting on my blog, though I may have mentioned it a few times. I first began to imagine the setting years ago, and it's often been a place I've used when I want to experiment with some different narrative style or approach. One of the first stories I wrote in the setting received a rejection that concluded,"That said, however, this is a terrific story, one that I'm certain I'll see published elsewhere soon." And that's been reflective of many of the responses I've received on the stories. Not quite right for any of the markets I send them to. That makes finally selling a Boskrea story especially pleasing. This one is a more recent one. I decided to take the stories I'd already written and see how they would work joined together in a sort of mosaic novel. I still go back and forth on my answer to that question, but as I wrote what's basically a novella-length story to weave in and out of the stand-alone shorts, I decided I needed one final stand-alone story to wrap things up, something that would take place (or seem to take place) far in the future, compared to the main events of the story. So this post-apocalyptic dream story (the subtitle, which appears in the pdf version but not the epub version, is "A collective, cultic dream, as recorded by the Story Eaters of Fallen Crown) was written to play that role, along with another flash piece that weaves in at an earlier point about those Story Eaters.
Email Post
Labels: experimental publication short stories